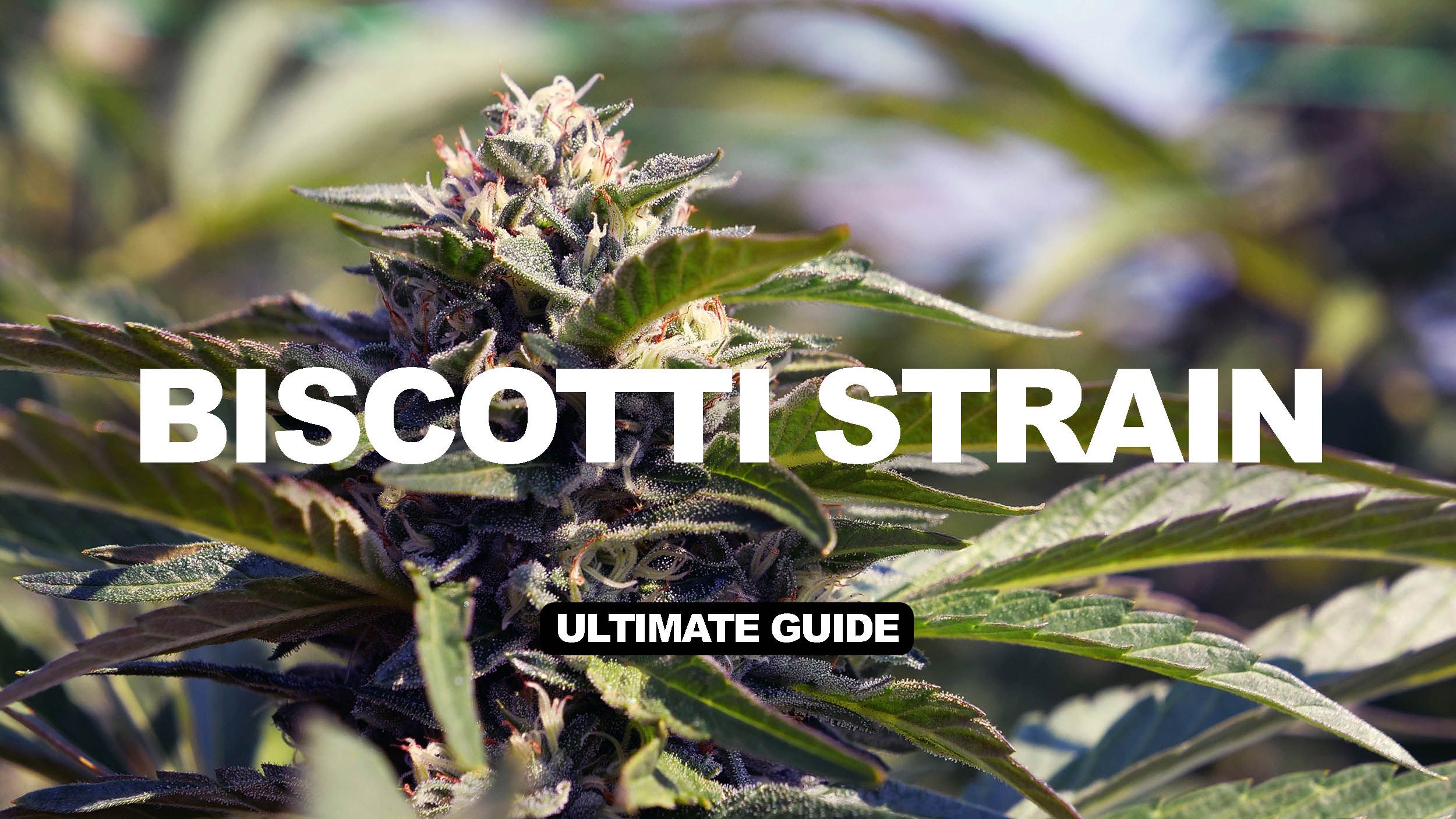 About the Biscotti Strain

The rare biscotti strain is the perfect hybrid for newcomers exploring delicious cannabis strains. It’s an indica-dominant strain whose parent strains are the Gelato # 25 and South Florida OG. The Gelato #25 passes down its gas and sweet notes coupled with a cerebral buzz. In comparison, the South Florida OG strain contains earthy and citrus notes while boasting calming effects. Due to its novelty, there has been some debate about whether the biscotti strain contains the third cross. Some ‘cannaseurs’ believe the third parent to be the Gorilla Glue #4 weed strain.

Like other indica-dominant hybrids, the biscotti weed strain is short with dense, spade-like buds. The leaves are olive green with purple hues that are visible during the cold season. Its orange pistils are unmistakable with a thick accumulation of trichomes. These trichomes contain a crystal-like resin that gives the strain its potency.

The biscotti strain gets its name from the Italian almond biscuits. It even has similar flavors. Expect vanilla and sweet almond flavors. Users claim it also has a sour undertone that’s akin to coffee.

Thanks to its parent strains, the biscotti strain delivers a dessert-like fragrance of earthy, gas, buttery, yet sweet notes. Moreover, it includes three primary terpenes: 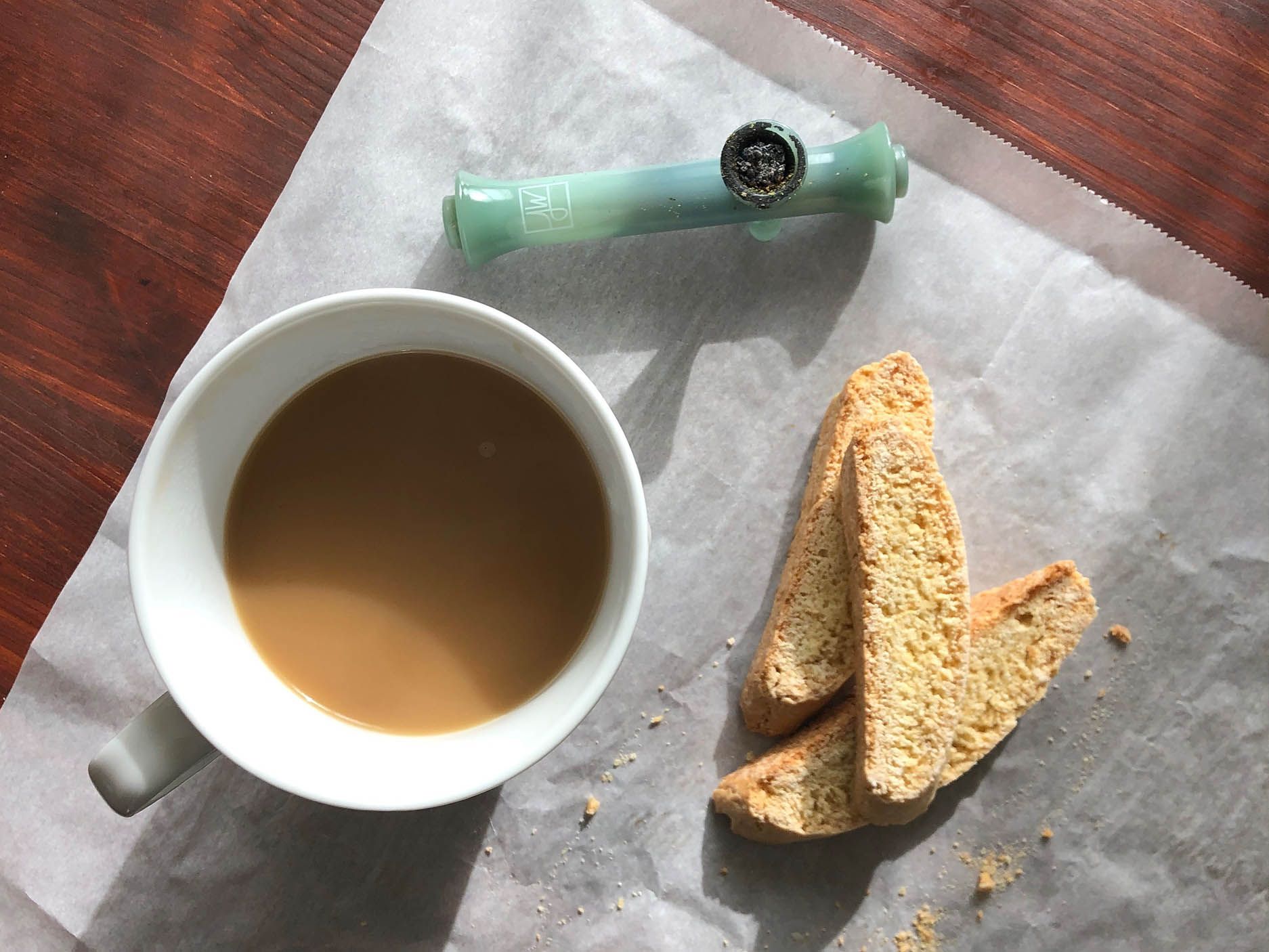 Because of its delectable nature, you should consider indulging through a vaporizer. But this is not to say that you shouldn’t smoke the biscotti strain. With a vaporizer, you get to preserve the strain’s flavors because there’s no combustion.

Popular Nicknames for the Biscotti Strain

Biscotti’s high terpene profile and flavor make it an excellent strain for various cannabis concentrates, including shatter, pre-roll, and hash oil. While making biscotti hash oil at home is possible, we recommend against it as it’s a complicated and hazardous process.

How To Grow the Biscotti Strain

Due to its newness, few cannabis users understand how to grow the biscotti strain. Experienced growers recommend growing this strain like you would other indica-dominant plants. And since it’s short and bushy, it will likely require the low-stress training method.

Doing so will produce more buds and an even canopy. Moreover, growers also recommend using the Screen of Green (SCROG) technique, whereby you tie the top branches to allow the ones below to receive light, contributing to an even harvest.

The biscotti strain can flourish both indoors and outdoors. As for the former, the flowering period is about eight to nine weeks. Expect a yield of atleast two ounces per square foot. If you decide to grow it outdoors, expect to harvest the plant in October. Note that biscotti performs well in warm climates. Also, anticipate a yield of up to 12 ounces.

Don’t let the buds’ tiny appearance fool you. The biscotti strain contains an average THC level of 25%. Some phenotypes are potent, going up to 30%. Expect to experience a body and brain buzz.

You’ll first experience feelings of bliss that will have you giggling and chatting away. What follows is a body high that will have you feeling relaxed and stress-free. Depending on your tolerance, the biscotti strain might produce a couch-lock effect. Therefore you might want to save this for evenings or weekends.

Some users claim that the biscotti strain can sometimes leave you with cottonmouth or dry eyes. And for some, it may worsen anxiety symptoms. Like other potent strains, it’s always best to consume moderate amounts to minimize such unpleasant effects.

While biscotti is primarily a recreational strain, users claim it offers several medicinal benefits. You may experience a mood boost and stress relief. Moreover, if you have mild PTSD, this biscotti strain may help fade these symptoms, leaving you with euphoric feelings throughout the high.

Due to its unfocused nature, users struggling with OCD have reported feeling more relaxed. What’s more, some also report relief from physical ailments like chronic pain and arthritis. And, because of its sedative effects, the biscotti strain may help manage insomnia.

Biscotti is a powerhouse cannabis strain that delivers everything from the flavor, aroma to a pleasant high. If you are thinking of trying it out, the HIKEI cannabis dispensary is the best place to buy your favorite strains. Besides the Biscotti Indoor by Connected in San Diego, we’ve also got a wide selection of products from top cannabis brands like STIIIZY and PLUGPLAY. Reach out to us for authentic weed flowers, edibles, concentrates and accessories.